Marriott Drilling is the largest British owned international onshore drilling contractor. Marriott currently operate a fleet of rigs and integrated project management services for many deep drilling projects internationally across a range of applications including geothermal, geoscientific, water resources and oil and gas. At present Marriott have projects active in the UK, Europe, Africa and the Middle East. 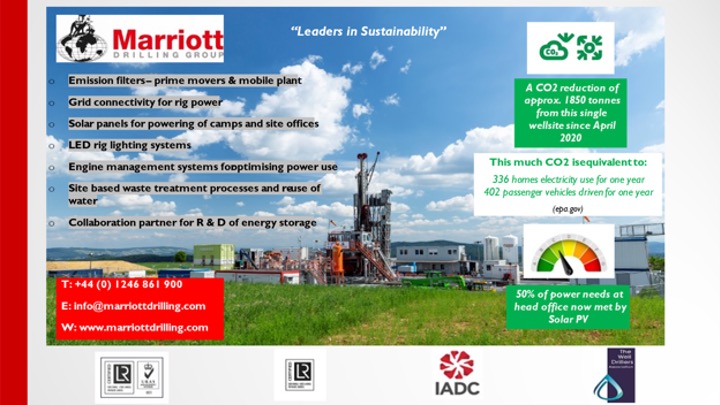 One industry sector of particular success for Marriott has been that of geothermal. In Kenya for example since starting operations in 2010, the wells drilled by Marriott have realised some of the highest producing geothermal wells in the East African Rift to date. Some wells have been known to produce up to 20 MWe installed capacity. Marriott have also been selected as the preferred bidder for the upcoming Corbetti Geothermal project in Ethiopia, which aims to add over 100 MWe installed capacity online in the next 5-10 years.

In addition to their commitment to becoming a service provider of sustainable power projects for the future, Marriott have also placed considerable focus on its ongoing and future operations with respect to increasing sustainability and a reduction in their carbon footprint.

Since 2019, Marriott have been running an integrated services project in Switzerland on behalf of the government agency, NAGRA. Operating in this jurisdiction requires conformance with some of the strictest emission standards in the world such as the Swiss Clean Air Act. Here Marriott is now using rig power straight from the national grid as opposed to from diesel generating sets. Enhanced emission filtration systems for mobile plant such as forklifts and cherrypickers are also employed together with LED lighting systems across the site. These initiatives have seen a reduction in CO2 on this one project alone of approximately 1850 tonnes since April 2020. A benefit of this is it acts as a predictor for our  industry as to where improvements can be made and where the future will lead us.

Marriott have also installed solar PV at its head office and workshop facility in the UK, which has seen a reduction in power required from the grid of 50%. The plan for the future will be to also roll out the use of Solar PV to its remote rig and camp locations for the powering of accommodation units and site offices.

In terms of future innovations, Marriott are also actively researching engine management systems to optimise and reduce power requirements and seeking to develop site based waste management processes which reduces the carbon footprint associated with the need to transport waste offsite for treatment.

Since 2017, Marriott have also been a collaboration partner in the GENSSIS project which seeks to develop an industrial scale energy storage and energy balancing prototype. This project would help the progression of renewables to the energy mix and was part-funded by the UK government via Innovate UK.